skip to main | skip to sidebar

JIMOTOGAKU - based on what we have here! (1)

“Jimotogaku” is an approach of community development born in local communities of Japan in mid-1990s. It focuses on existing local resources and facilitates community people’s initiative to utilize those resources. “Stop asking for what we do not have, let us start from finding out what we have” is a principle of Jimotogaku. It also emphasizes collaboration among “Soil and Wind” (community people and outsiders) to find out what the local communities have and how to utilize them. “Etiquette of outsiders” is attached more importance in the practice.

Jimotogaku practice was firstly started in Minamata where local communities had been destroyed by adverse impact of Minamata disease. It helped the local people to re-construct and revive community actions there, and then Jimotogaku practice was spread out to various local communities throughout Japan where local people and outsiders collaborated each other to find out existing resources and to utilize them for community development. Now, practice of Jimotogaku has crossed the border by ex-participants of JICA training courses, and we can hear from many friends engaged in community development in various countries telling that they are trying to apply approach of Jimotogaku in their fields.

This article aims at briefly introducing background and basics of Jimotogaku for those who want to practice its approach in each field. It will help you to explain Jimotogaku to your colleagues or community members, and it will give you some useful tips for practicing Jimotogaku in your field.

Origin of Jimotogaku – Minamata disease and reviving local community
Minamata disease is a disease of the central nervous system, caused by the consumption of fish or shellfish contaminated with methyl mercury compounds which were formed as by-products in the acetaldehyde synthesizing process of Chisso Minamata Factory and then discharged as waste into the Minamata bay, Kumamoto Prefecture of Kyushu Island, Japan. The first recognized outbreaks occurred around Minamata Bay in 1956. More than twelve thousand people living around Minamata have been officially recognized as patients affected by mercury. “Minamata disease not only caused serious health damage, but it has also had a massive and broad-reaching effect on local community, in terms of environmental devastation and the breakdown of community ties”, the Minamata City Mayor, Masazumi Yoshii mentioned in December 2000 . Chisso factory, that contaminated the bay and caused the disease, have been the main industry in the city for around 100 years employing many residents and contributing economic development in the area. At the time of the outbreak of Minamata disease, after it was made clear that the cause was the mercury in the wastewater of Chisso factory on which Minamata was economically dependent, the residents were divided against each other, and communication between people on different sides of the issues was severed for a long time.

However, in 1990s, some citizens and local government officials who realized that antagonism produces nothing, started to re-generate the local community. The activity was called “Moyai-Naoshi”. “Moyai” literally means to tie something together, and “Naoshi” means doing something again. They formed “Yoro-kai” at each local community (there are 26 communities in the city), where the residents explored their own locality searching for “what we have”, that is, finding out own local resources, their values and meanings for own lives, and plotting those resources into picture maps. Through the activities, the community people could rediscover the values of traditional life styles, rich natural resources, own culture, and various works that have been supporting their life for many years. They found that the community life of Minamata is strongly related with rich natural environment - mountains, rivers, and the sea .

Through “Yoro-kai” groups, the community people in Minamata reviewed and rediscovered their own local resources, and reconsidered the relation among their life, culture, and environment. As a result of those activities, the citizens started various projects that aimed at constructing environmental friendly sustainable society, such as “21 type-wise garbage collection”, “formation of Women’s Liaison Conference on Waste Reduction”, and “introduction of environmental ISO for schools”, “Eco-shop Recognition system”. Besides, each community began reviving traditional foods, festivals, games, and tools that were reconsidered through “searching for what we have”, and the community ties that had once destroyed were restored. And the process of the Yoro-kai activities - rediscovering local resources, formulating vision, and facilitating local initiatives for actions, was named “Jimotogaku” (literally means learning from the local) by the leader of the activities, Mr. Tetsuro Yoshimoto, an official of the city Minamata.

According to Mr. Yoshimoto, there are seven fundamental attitudes that anyone should keep when he/she is involved in the fieldwork of Jimotogaku;

1) Study in the field: you need to walk there, watch, listen to, and study the facts there.
2) Study with outsiders: Outsiders’ perspective can help the community members find out uniqueness of the area. However, outsiders should not teach, but they have to draw out potentials of the community by asking questions.
3) Listen without preconception: you should ask to the local people and record what he/she talks. Do not guess and write something based on your own perception.
4) Being on equal position: you should not teach and advise. Even if you talk to a small child, you should be on equal position to him.
5) Ask concrete things (FACTS): you should not ask opinions or perceptions. You need to ask about what he/she does/uses in his/her daily life.
6) Select appropriate place: it is important to meet community people at a place where they feel informal and easy to talk each others.
7) Ordinary man/woman has own specialty: you do not have to select any special person who is considered to be “specialist” of the community. Each and every ordinary community member has various experience you can find out many interesting skills, knowledge, and stories from those persons.

After the fieldwork to search for what we have in the community, it is necessary to analyze what are found. Mr. Yoshimoto introduces three ways of analysis;
a) Relating or linking what are found with each other
b) Overlapping different issues
c) Looking into the things below surface

The topics or themes of the Jimotogaku field study can be the following items;
Water passage / useful plants / play in the sea, river, and forest / calendar of food or plants / history of the community / map of artisans / housing style and climate patterns / rout map of local products / how garbage is treated / movement of wild animals / old streets and new roads / traditional beliefs and natural environment, etc.

(To be continued to the next posting)
written by i-i-net Tokyo 10:52

i-i-net
"i-i-net (Research and Action for Community Governance)" is a Japanese NGO focusing on common property resource management and community governance. We want to make contribution to promote mutual learning network of community development among local communities in the world. 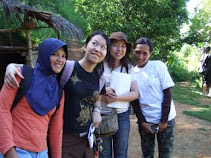